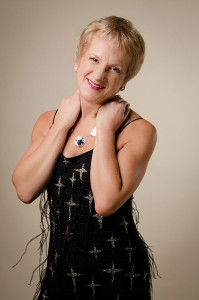 Born in South Derbyshire, Yvonne studied at the Royal Northern College of Music with Catherine Wilson. In subsequent years, she studied with Norman Bailey and Ian Baar with whom she continues to study. Yvonne began her professional career in the chorus of The New D’Oyly Carte Opera Company in March 1988. In her first season she understudied Celia in Iolanthe and performed the role in the company’s season at the Cambridge Theatre in London. The following summer saw the company performing at the Savoy Theatre and she sang the role of Peep Bo The Mikado. During her time with the company, she performed further small roles, including Cupid Orpheus in the Underworld, and understudies, becoming principal soprano in 1993 performing Josephine HMS Pinafore. She also sang the role of Elsie The Yeomen of the Guard.

Yvonne joined the chorus of Glyndebourne Festival Opera in 1994, the opening season of the the new opera house performing in The Rake’s Progress, Eugene Onegin and Peter Grimes. She made her Festival debut in 1998 singing the role of Amelia’s maid Simon Boccanegra conducted by Mark Elder. Her Glyndebourne Touring Opera debut was also in 1998 where she was understudied during the tour and performed the role of Despina Cosi fan tutte at the Mayflower Theatre in Southampton. During her time at Glyndebourne she understudied the roles of Cleone in Rossini’s Ermione, First Niece Peter Grimes, Mrs Julian in another of Benjamin Britten’s operas, Owen Wingrave, Countess Adele, Le Comte Ory and Annina La Traviata. Yvonne understudied the role of Esmeralda The Bartered Bride in the 1999 season and then performed the role on tour which involved training to be a trapeze artist. Yvonne left the chorus at the end of the 2000 season but returned to understudy the role of Musetta in a new production of La Boheme on the 2000 tour and performed the role three times, twice at Glyndebourne and once at the New Victoria Theatre, Woking.

As a regular singer of the Gilbert and Sullivan repertoire, Yvonne was invited to appear as soprano soloist in the Centenary Gala Concert of the Philadelphia Savoy Company, the oldest Gilbert and Sullivan society in America. Other concerts include Mozart Requiem in Nairobi Cathedral and Friday Night is Music Night with the BBC Concert Orchestra. She has travelled the world as a guest entertainer on the cruise ships for P & O, Saga and Fred Olsen.

Alongside her performing career, Yvonne is an adjudicator for the British & International Federation of Music Festivals and a tutor on the Ardingley International Music School (AIMS) course. She teaches privately, at Chichester University and Lancing College in West Sussex.